On Wednesday, Jack Dorsey suggested that bitcoin might be connected or lead to bringing about world peace:

We have all these monopolies off balance and the individual doesn’t have power and the amount of cost and distraction that comes from our monetary system today is real and it takes away attention from the bigger problems.

All these distractions that we have to deal with on a daily basis take away from those bigger goals that effect every single person on this planet and increasingly so. You fix that foundational level and everything above it improves in such a dramatic way. It’s going to be long-term but my hope is definitely peace.

Jack Dorsey during the B word conference

The following is a thought experiment about how bitcoin might bring about world peace.

END_OF_DOCUMENT_TOKEN_TO_BE_REPLACED

We do have one example in history where there was a dramatic cut in spending. It was after World War II. Because the spending was so high during the world war– it was cut almost 60% and people worried, the Keynesians said “oh we have to have more jobs programs, more jobs programs”. But by that time the malinvestment and the debt had been liquidated, the soldiers came home we didn’t have work programs and guess what, the taxes were cut as well and that was finally when the depression ended. It ended not when the war started, but when it ended.

So don’t ever be tricked into believing that so many argue — because they use this as an excuse, they say that when you’re in a depression or bad times the only thing that will get you out of the depression is a war. That is absolutely not true. Don’t ever listen to them because morally that’s evil and that is the wrong thing to ever try, because war is always a cost to the people.

– Ron Paul in this video

I was born onto the wheel in motion, just as we are all born onto the earth spinning around. So we might as well be nice to one other!

END_OF_DOCUMENT_TOKEN_TO_BE_REPLACED

At the end of yoga class today, we were sitting in a brief meditation and the teacher was saying that just to sit and be with your thoughts is the hardest “pose” of all. As she said this, I was thinking “No it’s not! All those hard effortful muscular energy poses are way harder!” Then the thought occurred to me that a few years back sitting and being with my thoughts was difficult. At that time, I just wanted peace, so I would sit and see what came up that was keeping me from feeling peaceful. One of the first things that came up repeatedly was the fact that I ate animals, and I like animals! This inconsistency was eating me up inside, to the point where I had trouble sitting still. (nowadays, it’s paying taxes that keeps me from feeling a deeper peace, but that’s the subject of another article.)

I happen to know that this teacher is not vegetarian. Now, I also see that there are many reasons she may find it difficult to sit still, but could it be that the inner conflict I had about my food is one that many people have, without realizing it? According to The World Peace Diet, this is exactly what’s going on, and it’s just the tip of the iceberg: the book claims that many of our conflicts and inconsistencies are connected to our habit of eating animal foods.

I’m amazed at how deep this goes for me, and I wonder how deep it goes for others, and our society?

We’re all unique. Everyone has a different combination of race/background/skills.

We’re all on the same team. Working towards.. whatever we want!

We’re all free. We can choose whether to play, when to play, and how and which way to play.

We can all improve. There’s always room to improve our skills or learn new ones. By practicing we can make ourselves, and hence our team, stronger.

This is the income tax:

Taken a little further, income taxes mean I have to choose between my survival and the survival of someone I don’t know in the middle east. Not pretty.

For the above reason, income taxes keep the pacifists from wanting to be wealthy. Wouldn’t it be neat if we had a bunch of wealthy pacifists? I wonder how they would invest their capital?

I’m heading out sporting my colors this evening: 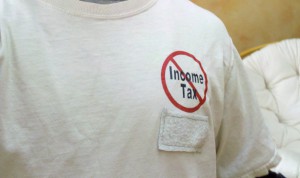 I haven’t been following much of the Libya debate, but I did see this video, and I expect the voice of peace has been much underreported.

I am especially intrigued at what my more liberal-leaning friends think of Obama’s current position vs. what he said when he was in the senate. Here’s what he said in 2007:

The President does not have power under the Constitution to
unilaterally authorize a military attack in a situation that does
not involve stopping an actual or imminent threat to the nation.

I liked that. Can we have that attitude back?

Next weekend there’s going to be a peace rally in NYC and San Francisco:

WHO ARE THE WARMAKERS?

THEY are the government, corporate, and financial powers that wage war, ravage the environment and the economy and trample on our democratic rights and liberties.

WHO ARE THE PEACEMAKERS?

WE are the vast majority of humanity who want peace, a healthy planet and a society that prioritizes human needs, democracy and civil liberties for all.

The Warmakers spend trillions of dollars yearly on endless wars in pursuit of global domination and profit while murdering millions of innocent people, installing corrupt and hated governments and funding occupations that displace millions from their homelands – trampling on the right of oppressed people to self-determination.

THEY send our youth – victims of the economic draft – to fight over the very fossil fuels whose unrestrained use threatens the future of the planet while corrupt and virtually unregulated oil giants dump billions of gallons of death into our rivers and oceans.

THEY wage a fake “war on terrorism” at home – the new McCarthyism – that promotes racism and Islamophobia aimed at destroying civil liberties and democratic rights.

I’m with you so far. The tone is one of anger, not peace, but the principles I mostly agree with.

THEY offer no solutions to the current crises other than more of the same.

I’m starting to wonder how much the organizers have thought about the peacefulness of their own positions.

THE PEACEMAKERS DEMAND a better world. Only a massive, united, inclusive and independent movement has the power to bring it into being.

“Demand” a better world? From who? I don’t think demanding stuff is part of a peaceful solution. It sounds like frustration-venting, not peace-creating.

WE DEMAND Bring U.S. Troops, Mercenaries and War Contractors Home Now: Iraq, Afghanistan and Pakistan! End the sanctions and stop the threats of war against the people of Iran, North Korea and Yemen. No to war and plunder of the people of Latin America, the Caribbean, Africa! End U.S. Aid to Israel! End U.S. Support to the Israeli Occupation of Palestine and the Siege of Gaza!

Again, except for the demanding nature, these positions are mostly peaceful.

WE DEMAND trillions for jobs, education, social services, an end to all foreclosures, quality single-payer healthcare for all, a massive conversion to sustainable and planet-saving energy systems and public transportation and reparations to the victims of U.S. terror at home and abroad.

Government is a force-machine. We’re not going to get peace by taking over the force-machine so that one group can legally plunder from another! This is replacing one wrong with another. An eye for an eye. Revenge. Not peace.

WE DEMAND an end to FBI raids on antiwar, social justice, and international solidarity activists, an end to the racist persecution and prosecutions that ravage Muslim communities, an end to police terror in Black, Latino and Native American communities, full rights and legality for immigrants and an end to all efforts to repress and punish Wikileaks and its contributors and founders.

WE ARE DEDICATED TO A WORLD
OF PEACE AND JUSTICE.

I’m thinking of going to this rally with a sign that says “Single-payer healthcare and public education are acts of violence.” I wonder if I’ll get trampled.

Peace is a simple allowance of loss.

Once violence of any kind (property, physical, psychological) has happened, the damage is done. No amount of fist-shaking, hooting and hollering, anger or revenge can undo what’s been done. So not to accept what has happened is simply irrational. The world you wish for — the one before the violence happened — is gone! We can’t get it back. Struggling to try and get it back is delusion and will lead to more suffering.

END_OF_DOCUMENT_TOKEN_TO_BE_REPLACED

I’m about to head into a forum at CPAC 2011 that is advertised as follows:

Flat, Fair, VAT or Gone? What Should be Done with the Federal Income Tax?

This is probably my most central political issue. Heading into the meeting, my thinking is that it has to be “gone”, and here’s why.

I want peace on earth for all; a critical requisite for this is that my own impact on the world be to move it towards peace, or at least neutral. In the current income-tax system, by working and earning income to support myself and my family, I am also indirectly supporting the military-industrial complex and foreign wars. In other words, in order to provide life and sustenance to those closest to me, I must contribute to death and destruction to those far from me. This points to an inherent contradiction in the system, that one cannot choose to live a life of peace.

Under a flat tax, this problem is exactly the same.

Under a fair tax (national retail sales tax), this problem is almost the same, but a little better because I can avoid buying new goods when possible and by making certain types of sacrifices, I can survive without paying very much in taxes. Nevertheless, in principal the same problem is there for anyone who truly wants to live a life of peace.

I don’t fully understand VAT, but I think it’s basically another kind of sales tax.

Let’s see if this forum changes anything for me..

UPDATE: It didn’t change anything. The speakers at the forum were all talking about how in principle, all income and sales taxes are wrong; but in practice, we have to sacrifice our principles temporarily on the way to not-sacrificing them, or something similar that didn’t really make much sense to me.