“The fact of the matter is, our taxation system is a voluntary system.”

This is completely absurd, and just goes to show how twisted round in circles, blind, and out of touch with reality our political leaders have become.

This is the Senate majority leader we’re talking about here, not some crackpot nobody. The fact that he can’t see that taxation is backed by force is very disturbing. I don’t understand how he can sleep at night!

Found on the street in downtown manhattan: 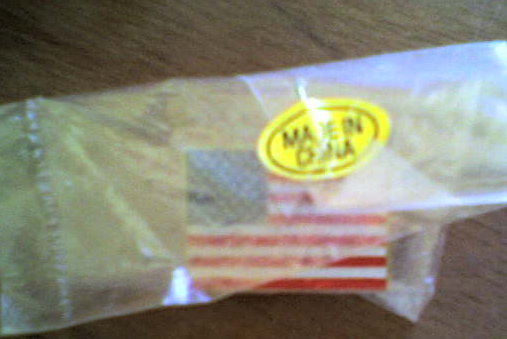 From a recent Daily Reckoning article:

“But… If you had purchased $1000 worth of beer one year ago, drank all the beer, then turned in the aluminum cans for recycling refund, you would have received $214.00.

“Based on the above statements, the best current investment plan is to drink heavily and recycle. It’s called the 401-Keg Plan.”

I heard something similar to this at a quaker meeting a while back. What would you do in the following situation?

You’re standing at the bottom of a mountain, by a railroad track. The track comes down off the mountain to a fork. One branch of the fork goes directly off a cliff into a deep ravine. The other glides smoothly off into the distance. Suddenly you see a runaway rail car careening down the mountain towards the fork, with at least two people sticking their heads out the windows waving and yelling for help. You look at the tracks of the fork and see it’s headed for the ravine. Thinking fast, you look around and notice a lever by the fork which appears to switch the tracks to the other branch. However, at the same time you notice a man tied to the tracks of the safe branch. The man is fat. What do you do?

Here are a couple variations:

As tax season rolls around again, it’s a great opportunity for principled libertarians to carefully consider their relationship to taxes. I like to compute the percentage of my income that goes to taxes. For most working people, that’s somewhere between 25 and 40 percent or more (not including sales taxes). When you get on up close to where you’re paying 50% in taxes, it starts to raise some interesting ethical considerations.

An interesting question that I haven’t thought about much yet is how the inflation tax plays in here. If you’re knowingly sitting on a pile of cash that the government inflates away to support the empire, have you essentially just handed that wealth over to the government?

Ron Paul has pointed out that if we simply changed our foreign policy from one of offense to one of defense, we would save nearly enough money to eliminate the individual income tax (which provides less than half the revenue for the federal government). There’s also the fairtax.

Just in case you need another reason to become a libertarian:

(I know some of my family with slow tubers reads this blog, so here’s an article covering the issue.)