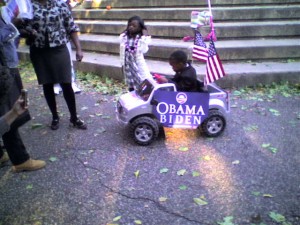 I’ve said before that I can’t bring myself to vote for Obama, but dangit sometimes his supporters are so fun and creative. Here’s another example.

Don’t ever think “it can’t get any shittier than this”. It can.

I was out on a night ride tonight, passion flaring after a highly emotional afternoon. Wandering through a sketchy neighborhood in Jersey City, far from home, I passed by some kids. Suddenly a plastic bag floated out in front of me, then thunk, it landed right on my front tire by the brake. I slowed and stopped. The plastic bag had broken by then, and I discovered it was full of shit. And fresh, smelly shit.

The kids were silent as I managed to wiggle the remains of the bag free and let it fall to the pavement. As I rode away without saying a word, I think one of them said “sorry”. I don’t even think they meant to hit me.

The shit was caked all over the brake, and it got all over my front tire. It had also splashed on my legs and shirt.

So be careful next time you have a shitty day, and remember, it could get shittier. Literally.

Let’s say, hypothetically speaking, that you’re a producer of wealth. Let’s also say that you are ethically opposed to foreign occupations your government is involved with. Finally, and this is another BIG hypothetical, let’s say your government imposes a nice hefty income tax on you to fund such activities.

Now. What are your choices, in maintaining your own personal ethical standards? Regardless of what anyone else thinks, or what you think about other people’s conduct.

I guess first the basic conflict should be underlined, in case the above hypotheticals didn’t make that obvious: you are a nice person who likes to be nice to people, and you don’t like hurting people. You don’t want your own efforts to go towards enabling the destruction and killing being wreaked by your government. But a significant fraction of every dollar you pay in taxes is going towards that.

Now, let’s break it down.

So look at this, and think for a bit about what would be the easiest for you. Option 1 is scary: you face very serious loss of freedom (and what for with our current media)? Option 2 is probably more difficult for some than others, depending on how strong one’s convictions are. Option 3 is, well, pretty damn easy for just about anyone.

Is it any wonder why socialism makes countries poorer?

The income tax is just plain unethical. At least, I can see no way around it.

Let yourself dream! It doesn’t have to be this way..

A gorgeous day to sit inside in front of a computer screen, watching the stock market implode.

Days like these I envy my super (whilst enjoying the walk home).