what’s so crazy
about living in peace
with our neighbors
without a military empire
all over the world?

what’s so crazy
about protecting individual rights
and freedom of speech?

what’s so crazy
about ending the
expensive,
ineffective,
and invasive
war on drugs?

what’s so crazy
about having a monetary system
that’s based in reality
that anyone can understand?

what’s so crazy
about at least talking about these things
in the debates for our elected officials?

We’re on the way to it. Starting with our very own food company! 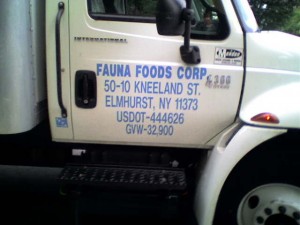 My commute brings me right around the site of the old World Trade Center in downtown NYC. Every year on 9-11, there’s some big hubbub. This year I took a few pictures and grabbed a few flyers from my commute experience, which I’m sharing here.

END_OF_DOCUMENT_TOKEN_TO_BE_REPLACED

Here is the source for a lot of what I’m reading on the bailout. It’s the most consistent explanation I’ve come across. It breaks things down without getting caught up in fuzzy abstract things that are all mysterious.

Warning: you may find that reading this carefully and with an open mind is a lot like taking the red pill. Best to be well grounded in preparation. I’m not kidding.

On the way home tonight I passed by the local Washington Mutual branch. It was late, so it was closed of course, and there was this memorial someone had constructed on the corner of the building, complete with candles and personal messages. I thought it was pretty funny. 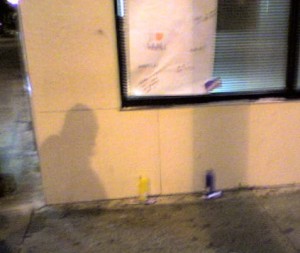 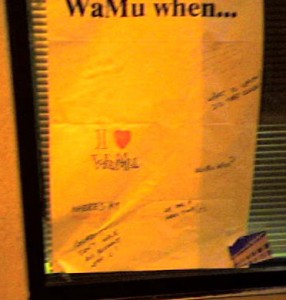 Both major presidential candidates support the bailout. All the third party candidates oppose it. Our debate doesn’t include this issue, and it’s pretty fucking important. The lesser-of-evils choice we’re presented is looking more and more transparent..

Section 8. Review: Decisions by the Secretary pursuant to the authority of this Act are non-reviewable and committed to agency discretion, and may not be reviewed by any court of law or any administrative agency. [from Paulson’s proposed legislation]

(a few bazillion dollars later) where’d all our wealth go?

Maybe the media isn’t really giving us the other side of the story.

In this economic environment, what I’m looking for is a reliable investment.

Commentary on this article from the ny times.

Paulson’s argument: the government has to act now to prop up the markets, whether or not it has a clue what it’s doing. Remember the tragic passage of the Patriot Act? Amongst dire circumstances and fear, the government grabs some power from its citizens that it’ll never willingly let go of. That time it was civil liberties, this time it’s financial liberties.

“This is a critical debate for another day,” Mr. Paulson said.

President Bush said, “There will be ample opportunity to debate the origins of this problem. Now is the time to solve it.”

That goes to show how different he and I think. How the hell are you going to solve the problem without understanding something about where it comes from? It turns out, what you’re doing to “solve” the problem may well be making it worse.

“Our system of free enterprise rests on the conviction that the federal government should interfere in the marketplace only when necessary [a.k.a whenever I say so],” the president said. “Given the precarious state of today’s financial markets — and their vital importance to the daily lives of the American people — government intervention is not only warranted, it is essential.”

As one of my coworkers is fond of saying this week: we now live in communist Russia! Fuck it, lets move to Russia where we’re at least open about the fact that we’re communists.

As Ron Paul is fond of saying lately: Congress might as well go home, since they’re not appropriating the money anymore — that would be too old-fashioned. In these modern times, the fed and treasury just print and spend it directly!

I go to the grocery in the afternoon. Organic produce section. Loads of plums and peaches, without clear pricing as usual. I load up on both, head to the dairy section, then checkout. When I get my receipt: organic plums, $1.49/lb. I got 3.53 lb for only $5.26. 16 plums. Sweet! I have to go back and really load up, and freeze ’em for the off season!

It’s 11:50pm, and I’m outside the apartment bringing the bike inside. Wait, I was going to get those plums! Thank God I live in America, the grocery is bound to be open.

Cool breeze washes over me as I zoom to the grocery store. Forget locking up the bike, there’s nobody here to steal it at this hour. Peek at the hours: what’s this? Closes at midnight? That leaves me 5 minutes. Go inside, hand on the shopping basket, vector planned: straight to plums, then checkout line. “Attention shoppers, the store is now closing, please head to checkout.” I’ll only need a minute to fill up a bag and head to checkout, but wait—dang! no wallet.

Tomorrow, plums, you shall be mine!