I ended up getting the Antec NSK3300 after all. Here’s how I suspended the drives.

The NSK3300 comes with two metal trays with silicone grommets for mounting the hard drives. One is on the bottom of the case: 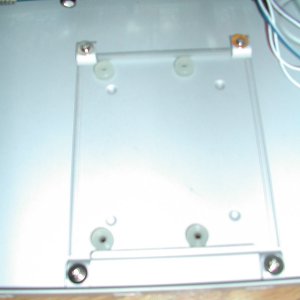 And the other is in the top compartment where the power supply is: 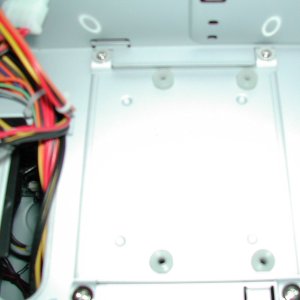 I took these out, thinking maybe I could use their structure for my suspension mount, somehow. Here’s a better picture of exactly what this piece looks like: 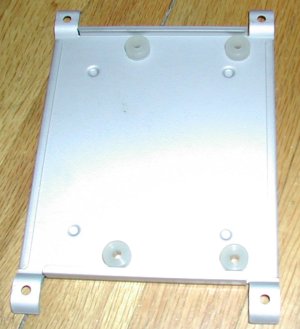 The grommets come out easily, and if you reposition them so they’re right on top of those funny looking bumps in the metal, they end up in exactly the right spot to mount a laptop hard drive: 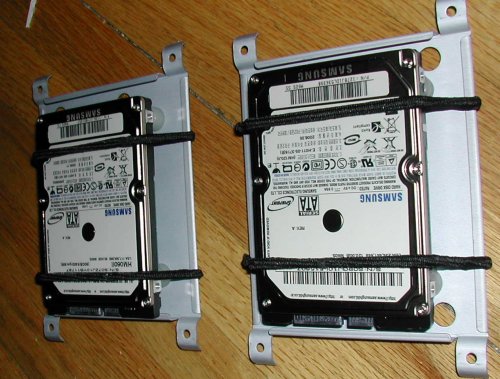 (to strap the drives on, I used some elastic bands I found at the local dollar store.)

It turns out, these laptop drives I got are really quiet. So quiet that I probably didn’t even need to suspension mount them to get rid of vibrations. However, the power supply that comes with the NSK3300 has exactly two SATA power cables: one long one that can reach all the way to the tray on the bottom of the case, and one short one that is intended for the tray in the top compartment of the case. Both cables do reach the upper front area of the main compartment, which is where it’s easiest to suspension mount. So I decided to stack the drives and suspension mount them together:

The elastic works as a nice soft-separator between the upper tray and the lower drive, leaving a small strip of air between (not sure if that’s better or worse for airflow, though they seem to be staying cool enough–keep reading). Zip-ties on the corners keeps this contraption in one piece: 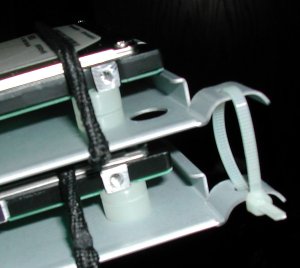 From here it’s just straight mounting using more of that handy elastic stuff you can get at the dollar store. Here are pictures of something close to what I ended up with (ignore the blob of white goo on the right corner of the tray, that was a failed experiment): 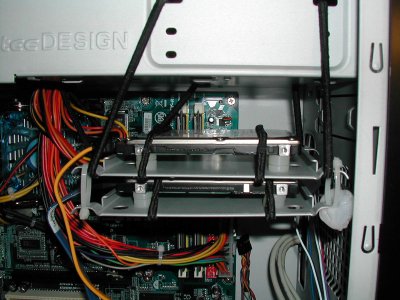 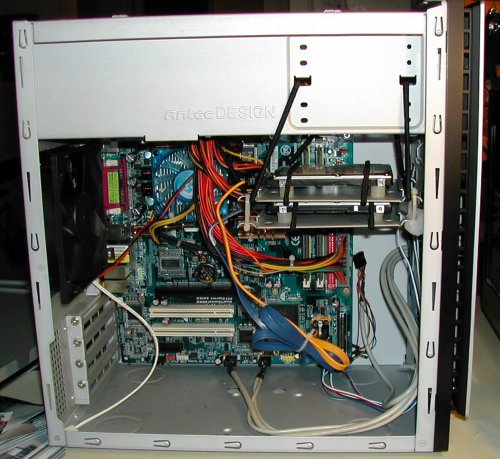 If you actually tried to do this, you would note that removing the trays leaves four little holes which could disrupt airflow. To fix this, I used some gooey earplug stuff I had laying around, and just plugged them up: 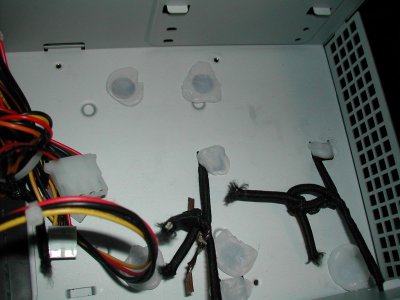 A note about the NSK3300: The power supply cabling sucks. The cables are generally too short, and there’s this black plastic gizmo that’s supposed to guide them from the upper chamber to the lower one, and it’s basically designed bass-ackwards. It wants to push the cables towards the left side of the case, but the cables want to go toward the right, closer to the motherboard where they plug in. This leaves you two options: you can remove the black plastic gizmo altogether, or you can invert it and use it backwards. In order to invert it, you have to do something about these plastic grooves on one side: 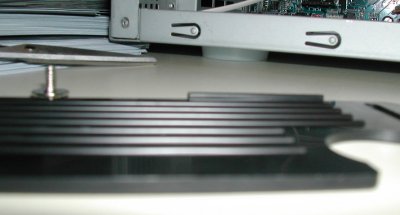 I just took a sharp knife and carved them off. I also had to chop off another piece of it so it looked like this (it’s normally rectangular–the top right is what I chopped off): 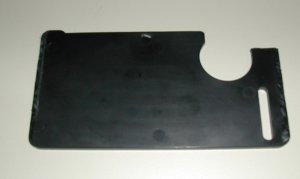 Here’s a picture of this black plastic thingy installed backwards from how they shipped it: 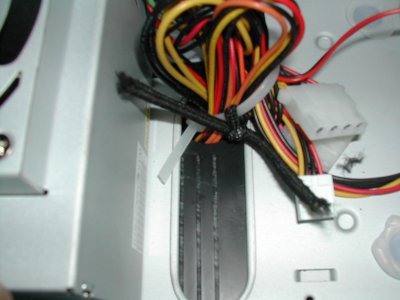 That’s basically all the modding I had to do to get this beautiful case to work for me. I have some concern that the elastic on my suspension mount might eventually wear through, or (more likely) slip, leaving the drives at a funny angle (just getting it level initially was tricksy enough); the actual suspension is the part I struggled the most with. I haven’t yet figured out how to read the temperature sensors in my hard drives (if I have any), but they are always cool to the touch when I check on them, so I think temperature-wise they’re fine.

In reality, if you had a performance rig you might have to worry a lot more about airflow than I do.  I’m running a mobile-on-desktop motherboard with onboard everything and a mobile core 2 duo processor.  At the wall the whole computer draws 30-38 watts.  So far I’ve never been able to get the cpu fan past the lowest speed, and the lowest speed on the 120mm case fan is sufficient airflow for the whole case.