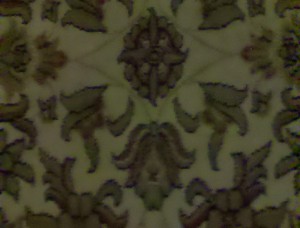 “We are here!” spoke King Goat.
“Dance my lovelies, among flower and bush!”
And so they leap’d and flowed all about the gardens
protected by the safety of the Wall.

Now at that time there were two walls
for the Designer felt that two
were safer than one.
And beyond the second wall was the Void
that great expanse of nothingness and Chaos. 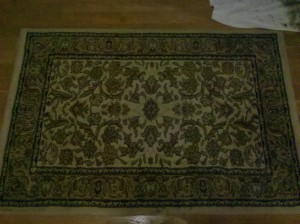 And so it was between the two walls that evil lurked.
With bright red eyes and a black cloak
the falconriders awoke
and let loose a great pealing scream
for they were hungry
and the music from across the wall was pure beauty
which they despised. 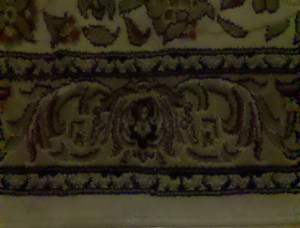 “Let us fly across the wall,” one hissed.
“And feast on Goat and Dancer.”
And so with a great beating of wings
they rose above the inner Wall and descended
towards garden, Goat, and Center of Things.

Excerpts from How We Know What Isn’t So, with commentary.

seeing what we expect to see:

Much of the scientific enterprise can be construed as the use of formal procedures for determining when to throw out bad ideas, a set of procedures that we might be well advised to adopt in our everyday lives. We humans seem to be extremely good at generating ideas, theories, and explanations that have the ring of plausibility. We may be relatively deficient, however, in evaluating and testing our ideas once they are formed.

If I want to get ahead in life, it’s not a matter of generating good ideas; everyone can do that. It’s a matter of developing solid processes for evaluating my ideas and disposing of the bad ones. And then following through on the survivors, with the confidence and conviction that comes from having given them such a critical evaluation.

Certain kinds of negative events can accumulate in ways that positive events cannot. I can become convinced that all the buses are headed in the wrong direction by observing quite a number headed the wrong way before I encounter one going in my direction.. Note that the opposite cannot happen: Unless I have difficulty boarding, I never observe several going my way before I discover one headed in the opposite direction […] because of this asymmetry, we can experience a certain kind of “bad streak,” but not a complementary streak of good fortune.

This is the curse of the system administrator. We are responsible for keeping the systems running. When everything is going smoothly, we don’t hear anything. Yet we are succeeding with flying colors. When things fall apart, we hear all about it. Thusly, we can become convinced that the systems are always broken. Thusly, my first question when I get in to work in the morning: “what’s broken?”

seeing what we want to see:

In numerous studies across a wide range of situations, people have been found to attribute their successes to themselves, and their failures to external circumstances.

Attribute my successes to myself? Well, with a little luck thrown in, yes. Attribute my failures to external circumstances? Not at all. I really can’t trick myself into having it both ways like that. I’m completely free, which means I get to enjoy both the pure powerful joy of relishing in my own successes, and total responsibility for my many failures. Hmm.. am I actually unusual, or have I just tricked myself into thinking I’m different?

Indeed, some evidence has accumulated that people who habitually fail to put the most favorable cast on their circumstances run the risk of depression.

Aha! Perhaps I am different, and this is how. I’m realistic and tend to get depressed by the irrational state of things. I’ve experienced this deeply.

So we can relish in our inner knowledge that we’re right, but it’s best to learn how to protect our mood and well being in this crazy world.

I would pay a lot to be able to find and hire people who have this tendency and have learned to maintain balance and well being in spite of it.

[…] people generally think of themselves as objective. People rarely think that hey hold a particular belief simply because they want to hold it, the evidence be damned. This sense of objectivity can nevertheless be illusory: Although people consider their beliefs to be closely tied to relevant evidence, they are generally unaware that the same evidence could be looked at differently, or that there is other, equally pertinent evidence to consider.

Objectivists have a tendency to think “others aren’t objective, but I am”. This can be construed as true by fiat: they call themselves “objectivist”, and others don’t. There might be something enlightening to the objectivist in this paragraph.

After talking at great length with an objectivist about the notion of objectivity, I arrived at the conclusion that I think the whole notion of an objective reality is an overcomplicated explanation for the way of things. It’s simpler that we each experience our own reality—even simpler that I experience my own reality and that’s all that matters.

Beliefs are like posessions […] the metaphor also applies to how our beliefs fit together. We carefully choose furniture and works of art that do not clash, just as we try to avoid the dissonance produced by incompatible beliefs.

As the world grows better connected, can we find the ground that is truly common; the beliefs that are harmonious with all cultures and backgrounds? That would be neat.

While the first part of this book was nicely evidence-driven, the second part was more like an op-ed and started to get pretty out there. For example, in chapter 8 (Belief in Ineffective “Alternative” Health Practices), the author attempts to dispel the idea that our nervous systems and immune systems are fully integrated:

An immune system that is easily influenced by various mental states might provide certain benefits such as the ability to lessen the symptoms of disease by mental imagery. But there would also be severe costs to such a system. It is at least as easy to imagine bad things happening as it is to imagine good; it is at least as easy to picture diseases as it is to picture health.

Suddenly we’re in the land of no citations. The author’s own bias has come in here; for him, apparently, it’s much easier to think negatively than positively, and so he’s afraid of a world in which his mental states affect his health, and therefore he doesn’t think the world works that way. Hmm..

[…] people who believe that “the only way to get anywhere in this world is to push, push, push.” […] The occasional success will “prove” the wisdom of the chosen course of action, and the individual will never learn how effective he might have been had a different strategy been employed.” In addition, the person’s aggressiveness may very well foster resistance in other people, and thus unintentionally ,create a hostile world in which it really is true that the only way to get anywhere is to push, push push.

Careful! This could be you. It has been me at times.

I’ll throw another irrational tendency into the mix. When I bought my house, my realtor came over to talk about it. There had been some high-strung negotiations with the previous owners, which I’d long since let go of. But the realtor came over and started to blast the previous owners in some sort of ineffective bonding attempt. I call this tendency “us & them”, and it’s the rare gem that doesn’t abide by it. It gets stronger in larger group settings, such as a church (we have to convert them all to our correct faith), or the corporate setting (our company is good, and all those guys out there are scumbags). These viewpoints may help us boost our egos but they don’t serve us in the long run, because they blind us to our own (our church’s, our company’s) fallibility.

It would be cool if yoga got popular enough to where somebody designed a car (in particular, the interior seats) with body alignment in mind. I would be first in line to buy the yoga car! Let’s see..

It could have a driver’s seat that supports tilting the pelvis forward, and sitting up straight. Sitting up straight would require a greater distance between chair and ceiling than my prius has — I’m much longer when I’m straight!

It could support symmetric driving: driving with either foot, so that the legs and feet get a balanced experience.

The passenger seat could fold back to totally flat, so you can practice yoga postures in there when you’re parked and it’s too cold to be outside.

And just in case any car manufacturers out there are listening–I’ll invest!

when I sit to breathe with them
and watch them whizzing by
I ask whoever’s driving them
“Who taught YOU how to fly!?”

I spend some time wrestling myself
until I learn at last
that I can just let them run wild
while I enjoy breakfast!

The House passed this bill that would allow the Federal Housing Administration (FHA) to
raise premiums for mortgage insurance, with the intent of boosting its dwindling reserves.
The bill now goes to the Senate.

It sounds like the government is running a business, and whenever they want to make a business decision (like raising prices to increase reserves), they have to take a vote!

the woman leading the meditation
speaks with sadness
about happy things

freedom fighter?
only do it
if you can smile
–if it brings a smile!
any other way is a contradiction in terms